Whipping those WIP's to the finish line!

WIP update
Isn't it a great feeling to get those long time WIPs (not going to say UFO's!) out and start showing them some more love?  If you saw my last post then you would have seen that I stitched on a 2015 WIP recently. 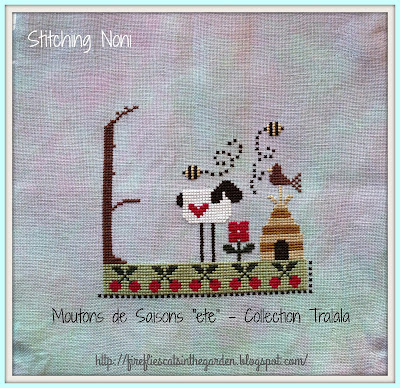 The other long lost WIP that I have been stitching on recently is Nora Corbett's "Christmas Eve Couriers - Comet".

The last time I showed you "Comet" was way back in June 2015... I have just re-read that post where I rabbited on about a stitching rotation... no, that never really happens in my stitching life no matter how much I try to do it!!!

Over the last couple of evenings I have managed to finish the antlers of "Comet" and I am starting on his head.  As he is still on the q-snaps I might stitch on him again today...

First up is another of those old kits that I had languishing in the bottom drawer of the craft room.  I have no idea when I bought this but it would have been in the late 1980's or early 1990's.  I pulled it out last month to start stitching it for the Vintage SAL on one of the FB groups.  This is as far as I got.... 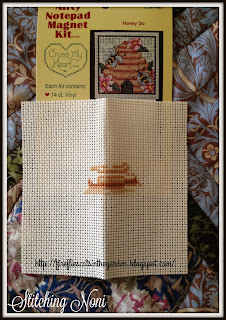 This one is called "Honey Do" and is stitched on 14ct vinyl.... very strange medium to stitch on but, I do like the design so I will get back to it again very soon and get it finished.  The kit came with the magnetic notebook accessories to put it all together.  Once done it will be a nice little addition to the fridge or even a nice little gift for someone... :o)

The other new start that I had in June was the "June" design for the Snowflower Diaries "Joyful World SAL".  I don't have some of the threads for this so I started with what I have got... It is stitched on a pale blue 28ct linen from my stash. 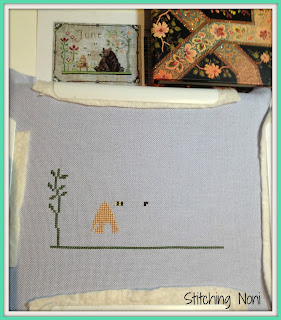 Finishes Update:
First up on the finishes list is a mini finish....

Most of my stitching time over the last week or so was dedicated to the new Durene Jones / Lakeside Needlecraft Fantasy SAL.  When I last showed you the border stitching it looked like this:

The fabric I am using for this one is "Silver Springs" 32ct Jobelan from Colour Cascades Fabrics using a variegated thread from Cottage Garden Threads called "Heliotrope". 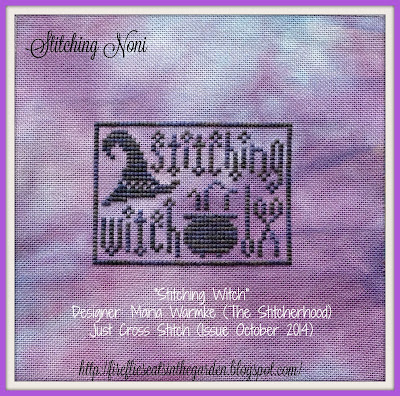 This design is called "Stitching Witch" and is designed by Maria Warmke from The Stitcherhood.  How perfect is this design for my Halloween Ornie Blog July post?  This month's theme was "witches accessories" and this design has a hat and a cauldron - tick... and then needle and scissors!!  It was published in the October 2014 issue of the Just Cross Stitch magazine.

I stitched this on a piece of fabric from Colour Cascades Fabric - no name as it was in a cardmakers pack - just love the colours!  The thread I used was "Nevermore" from Jodyri Designs.  The design called for all black thread but I decided to try something different for a change!!

I think I am now up to date on all my WIP stitching... it's time to sign off now and get back on the couch with my stitching in front of the fire (we have rain with storms forecast today... oh well it is winter!).

Haha, that's the trouble with blogs - you make rash statements that are visible years later to disprove you! Never mind, you've stitched plenty this month.
I'm also looking forward to seeing the Durene Jones designs, the border is lovely, I hope the designs aren't too cutesy.
Great work on the reindeer too and I've already said how much I like the Stitching Witch.

Busy needle this month - Progress on 3, 2 starts and a finish. Now THAT'S productive.

Great new finish, my dear - I love it on the purple and oh, I am getting so tempted by that new SAL but no, no, no, I must stay strong!

Lovely work on everything!

Great progress with Prancer! I find that a stitching rotation doesn't quite work for me either...it just feels too much like hard work then and that makes me not enjoy the process! So no rotation....just stitch what I want when I can!
Lovely little starts there and cute Halloween stitching!

The magnet kit looks interesting, vintage it is. Great progress on your pretty WIPs.

You've had a great month! I love those Tralala sheep and you chose a gorgeous fabric to stitch on. Great Halloween finish and another good fabric choice!
I haven't seen that Durene Jones SAL - am going to look for more info!