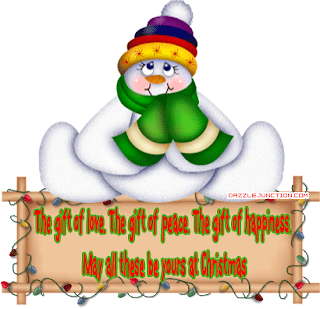 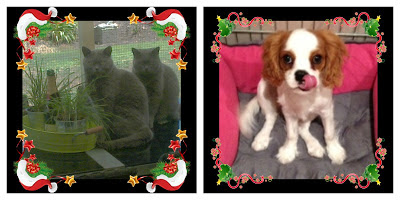 Wishing you peace, love and joy this Christmas season

Hand stitched by Stitching Noni at 8:00 AM 8 comments:

Email ThisBlogThis!Share to TwitterShare to FacebookShare to Pinterest
Labels: Christmas

I'm back again... two posts in two days.... think that is probably a bit of a record for me!

Yesterday I told you about the exchange ornament and package that I sent to Rita as part of the MS Lovers Blog Winter Exchange.

Today I will show you what arrived in my mail box on Friday all the way from Francesca in Florence, Italy.

I am totally blown away by what I received from Francesca.  I am still in shock by what was in the big box that arrived.... I have been completely and utterly spoilt.

Isn't this just amazing....  Francesca stitched the "Trimming the Tree" tree skirt for me.... One of my favourite designs and the full design of what I stitched for my exchange.  You can see the little hedgehog at the end that I stitched for Rita.... Think there must have been some sort of intergalactic telepathy going on here!!

I just love this tree skirt!  I love the way that Francesca has finished it off the little ties and the Christmas ribbon across the top.  Just gorgeous!!!

Francesca also included some other lovely ornaments, a calendar and a little stocking full of goodies....
Also in the packages Francesca included some red and green fabric and some lovely red and green thread....  and in the stocking there were these gorgeous buttons and charms...
And then to top it all off... there was also this lovely Lizzie Kate chart and a reindeer pot holder....
I am completely lost for words to receive this most amazing and beautiful exchange package from Francesca.  I can't begin to express how I felt when I saw what was inside the box.  I have to admit that I had tears in my eyes when I was opening the packages....  Francesca, you have spoilt me rotten.. and I thank you from the bottom of my heart for your friendship and for this most wonderful gift.

I have displayed all these wonderful gifts on the desk with the other Christmas stuff that we have out at the moment.  You will notice that I now have an ornament tree on the desk... Hubby and I saw this when we were out on Friday... and I thought that I must have it to display the lovely ornaments that I received.

Time to go again.... with today being Christmas Eve it won't be long til the man in the red suit comes sliding down chimneys and leaves package for all the little children.

Til the next time we meet Merry Christmas to all

Hand stitched by Stitching Noni at 8:00 AM 8 comments:

I have again taken part in one of the MS Lovers Blog exchange - this time the theme was a Winter Exchange/Christmas ornament.  So with Christmas and the posting date just around the corner I went to my trusty old "Best of Margaret Sherry" bookazine.  This book is full of some great designs so I knew that I would find the perfect one.

It took me a little while to pick the design that I wanted to stitch as I couldn't decide whether to do one of the "Twelve Days of Christmas" or something else.  In the end it was the cute little hedgehogs that swayed me... and I decided to stitch part of the "Trimming the Tree" design.  The part of the design that I decided to stitch was one of the hedgehogs carrying the Christmas lights.  They are all so cute...one day I will stitch the whole design.
To finish the ornament I used a red and green Christmas fabric to border my stitching, trimmed it with some pretty beaded trim, a bell and some more beads.  The backing fabric is a red holly design that I thought would go very well with the beaded trim and the other fabric.

My ornament was mailed off to Portugal with plenty of time to spare.... for a change!  Rita was my exchange partner.  Before stitching my ornament and putting together the rest of the package I spent a bit of time looking over her blog to see what her other interests were besides stitching Margaret Sherry designs.  Rita had mentioned on her blog that she has started doing some scrapbooking so I thought I would put together a package of bits and pieces for Rita to use in her scrapbooking.

Included in the package were some Christmas stickers, ribbons, pom poms, buttons, brads, Christmas scatters/sequins, Santa pegs and of course a couple of candy canes!

I have now received my exchange package from Italy, so stay tuned and I will show you very soon the most amazing package that came in the mail on Friday.

Til then, happy stitching

Well hello again.... yes, I am still alive and kicking!

Here we are again - another ORT report.  This is the last TUSAL for 2012. Hopefully Daffycat will host this great fun event next year.

This month I have managed to get some stitching done... but I can't show you too much as it is all secret still. Once the packages arrive at their destination I will show you the wonderful little things I have created.

The ORT's jar is again full... and lots of very pretty coloured threads have found their new home in the jar.  So where do we find the ORT's and the dragon this month?  As it's Christmas they can only be hiding amongst the Christmas deco's!

This year we have decided not to put up the Christmas tree just in case a certain puppy decides to pull it down on top of herself!  So in lieu of a Christmas tree we have a little tiny tree on the desk with the angels and some other deco's.

In the background you can see a little pillow that I recently received in the mail from Valerie from Fee le point.  Is this just lovely?!  I love this little stitched scene, and look at all those little buttons and bits and pieces that Valerie also sent.  Just gorgeous - thank you :o)

I have something else to show you as well.... a stitched card all the way from Anne in Canada.  Last month I showed you the card that I sent to Vilma in the USA as part of the Margaret Sherry Yahoo Group Christmas card exchange; and this is the card and calendar that I received from Anne.  Thank you Anne - a gorgeous card, so sparkly :o)

This weekend is also IHSW.  This month I forgot to sign up.... oops!  But I have managed to actually get some stitching done... but I'm not going to show you as I was finishing off my last secret stitching for the year.

Well dear readers, that's it for another ORT report and IHSW update.  See you all again next year... Pop on over to Daffycat's blog if you are interested in keeping in touch with what is going on with the 2012 TUSAL, and don't forget to drop in on Joyce's blog to check out who joined the IHSW for the month.  Next year we will hopefully be doing this all again.

Til the next new moon in January 2013, happy stitching and may your collection of ORT's begin again!