WIPocalypse is run by Melissa over at Measi's Musings and is now in it's 6th year (amazing!).  The object of the WIPocalypse is to stitch on projects that you want to complete before the end of the world!

At the beginning of January I picked out 17 WIPocalypse projects to work on in 2017.  The full list of my 17 projects can be found on my WIPocalypse 2017 page.

This update is going to be a pretty good update as I have managed to stitch on a number of my pieces over the month of November.  So here we go for the November show and tell!

Day 10 has finally been started 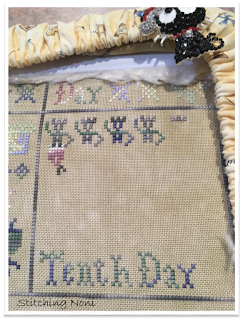 I really need to catch up on this one if I am going to be finished by the end of December!!

This is what "Comet" looked like in my last update: 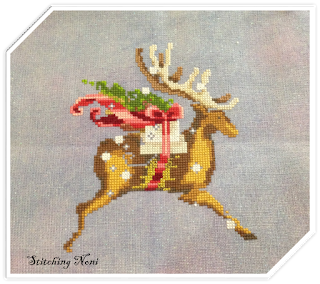 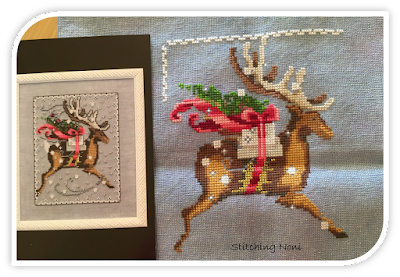 The border has been started... so we are really on the home stretch now! 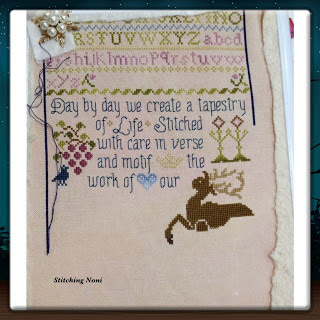 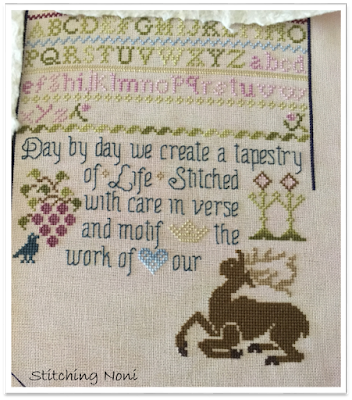 The deer is now done... still a bit more to do on this one - I am not sure if it will be done before the end of the year now!  I have been a bit bogged down by it again....

The last time I showed this one was back in October 2016... and this month was the first time I picked it up again since then! 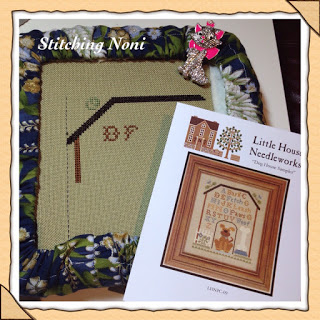 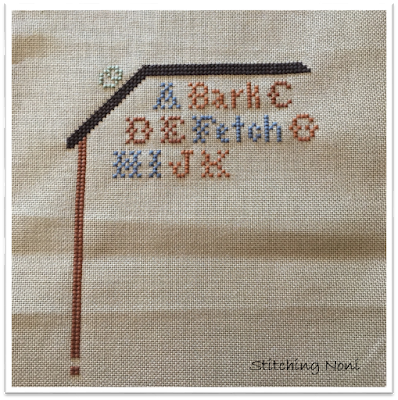 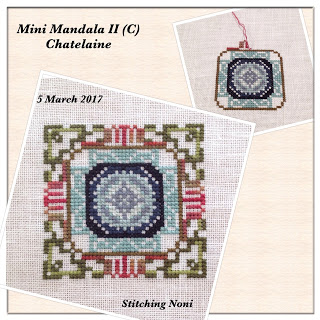 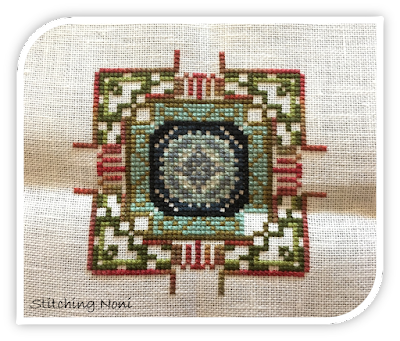 Little bit more progress... the square has increased by one more row of stitches 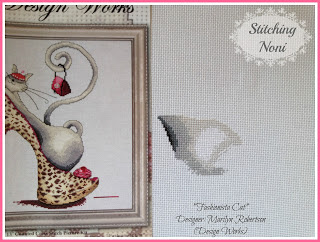 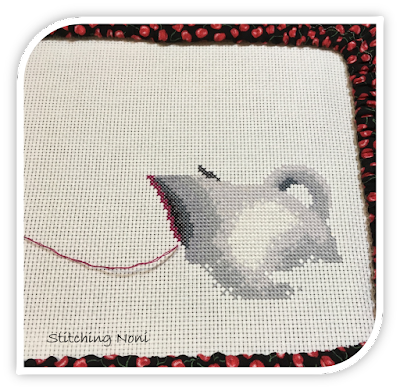 I had a good stitching session on this one during November and it's nice to see some progress at last! 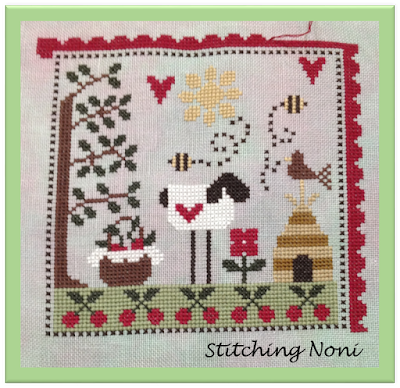 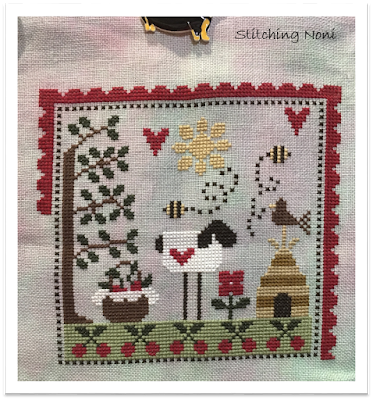 That border is slowly coming together and then this little cutie will be done and dusted!!

This month's question is: What finishing style have you never tried but would love to do?
Interesting question given I don't do a lot of final finishing.... I have done pillows/cushions and a couple of flat folds for those pieces that I have managed to finally finish, but one of the finishes that I haven't tried yet is a cube finish.  Maybe that is something I will try one day!!

So that's it for this update! The next check in is on Sunday 31st December 2017. That will be the last one for the year... Can you believe it? If you want to see what everyone else has posted for November drop into Measi's blog and check out the November link up page. 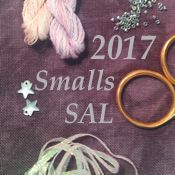 The Smalls SAL is hosted by Stitching Lotus

It's time for a catch up on my Smalls stitching for the month of November.  My last Smalls post was only a little mention last month in the joint update post... so this month I am giving it it's own post!!

I do have a couple of small finishes to show you this month which I am very pleased about!! 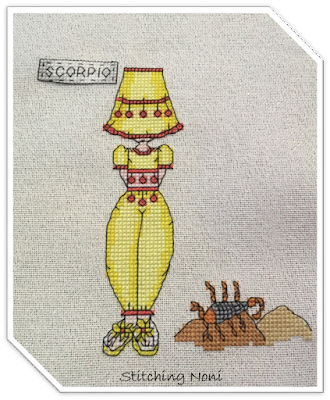 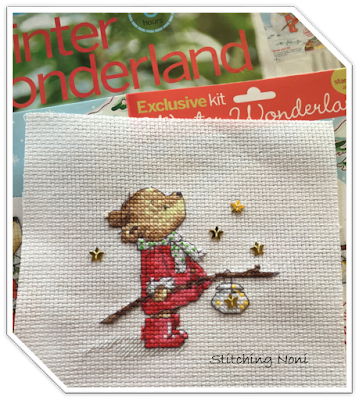 
To see everyone else's Smalls posts for November pop over to Heather's blog and check out the link up post.

Next Month – The next Smalls SAL check-in will take place on Friday, 29th December 2017.

Hand stitched by Stitching Noni at 11:44 AM 3 comments:

Oh that is so true... slow progress is my only progress...  I have been stitching and getting some good progress on a couple of projects but my posting/blogging progress is almost no existent!!

So in an effort to fix that... here is an update on everything that I haven't shown you for October and a little bit about of info what I am going to try and do in November.

Gifted Gorgeousness Stitching
I completely missed posting for GG during October.  I managed to stitch on two pieces that could fit in the GG brief during the month - I will show them here as I have something up my sleeve for the November GG post.

Happy Howloween - Brooke's Books
(Freebie chart) the link to the freebie page is here
The last time I showed this was back in July 2015... and that was the last I stitched on it.... I can't believe that, but it must be true as this is what it looked like when I started stitching on it in October.

It now looks like this:
Dream Big - Country Cottage Needleworks
(Gift from Tiff)
The last time I showed you "Dream Big" was back in August 2017.  The gorgeous design is a gift from Tiff and I am almost done...
This cute little bunny now looks like:
So that's it for GG stitching.... now onto Smalls stitching (such that it is!)

October Smalls Stitching
The only "small" that I stitched/finished during October was my Peek-a-Boo Pals - Libra, which you have already seen for the Zodiac SAL.
I did however have a couple of new Smalls starts... 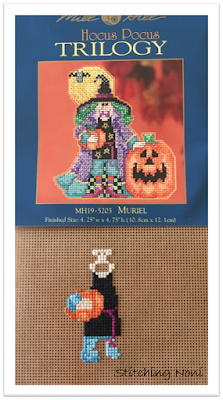 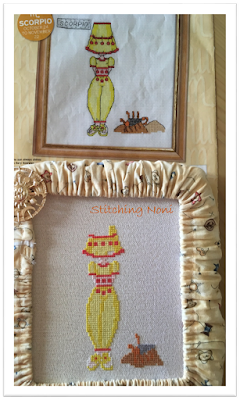 My little Scorpio girl is not quite finished... but I will try and get her done by the end of the week!

So that's it for Smalls... no new finishes but hopefully by the end of November that will change!

WIPocalypse Check In
Woeful progress on my WIPocalypse projects during October.  The only pieces I worked on you have already seen... I finished Halloween Happiness on 1st October and 12 Days of Christmas Day 9 was finished on 15th October.  I haven't even started Day 10 on 12 Days!!  Now I am going to be in trouble with my plans to finish that one this year if I don't get a move on!!
This month Mel has posed a second question... I will answer that one first and then answer the monthly question.

Do you have any plans or instructions for your stitching projects and stash for after you’re gone?
I don't have any plans for any of my stitching projects or stash for after I go.  No one in my family stitches... it is something that I have jokingly talked to Hubby about and his solution is to get 2 coffins - one for me and some stash and a second one for the rest of the stash - after all I am going to need to take something with me when I go!! 😄

How did you begin stitching?
I started stitching way back in the early 80's when I was 20-something.  My mum used to buy a craft/home magazine (Better Homes & Gardens I think it was called) and they used to occasionally have embroidery or cross stitch patterns in them.  You could also buy some kits that you could embroider aprons, pillow cases or table cloths with and I bought a couple of those to try.  But my first introduction into embroidery was by my Mum's mum.  She used to hand embroider doiley's and she got me to try some when I was about 10 or 12... I didn't enjoy the embroidery but when I found the stamped cross stitch versions I decided that I could do this!  From humble beginnings as they say!

OK... so that's the missing October stitching progress done and dusted.... how about some other stitching pics?

I last showed you this back in September.  I had hoped to stitch this for the SAL that Vonna was running over on the CCN/LHN facebook page but alas that was not to be!  But I will keep stitching on this over the next few months and it will be finished eventually!  This month Stitch Maynia's Designer SAL is Little House Needleworks so I will put in a couple of stitches during November for that SAL.
It now looks like this after stitching on this a number of days during the last few weeks including trying to stitch on it last weekend at the Colour Cascade Fabrics stitching retreat (more talking than stitching being done on Day 1!!):
During the month of October I also stitched on the following:

Castles in the Air - Long Dog Samplers
Fabric: 32ct Belfast "At Last" Colour Cascade Fabrics
Thread: DMC White (accents will be in gold or silver)
I spent a Sunday stitching on this during October and it now looks like this:
Queen of Peace - Mirabilia (Nora Corbett)
Fabric: 32ct Opal Belfast Linen "Hole in the Sky" - Colour Cascade Fabric
Threads: DMC, Kreinik
I hadn't since on this beauty since April 2017... so I took her to the Colour Cascade Fabrics stitching retreat last weekend and spent a number of hours stitching on her on Day 2....
I carried on stitching on her when I got home on Sunday night and she now looks like this:
Ok... that's my October stitching update.  I have been thinking about what I want to do in November and have come up with a plan!  I have 15 WIPocalypse projects left for 2017 - I know I won't finish them all but there are some that I haven't touched all year, so my plan is to stitch at least 50 mins on each one in November.  Stitch Maynia is having a SAL relating to 50... it's a spin-off of a writing challenge so I thought I could use that to touch all of my other projects and who knows there may be another finish before the end of the year!

So that's it for today...
Sorry it's such a long one!
Til next time, happy stitching!
Hugs xx
Hand stitched by Stitching Noni at 11:59 AM 10 comments: