Dogs are not our whole life, but they make our lives whole
~ Roger Caras ~

Over the next couple of weeks I will hopefully "finish" the puppies into a lovely hanging for the craft room.

My latest stitching is a very secret stitch... which I hope to be able to show you sometime in the next couple of weeks.

Til next time happy stitching!

Darn the wheel of the world!  Why must it continually turn over?
Where is the reverse gear?
~ Jack London ~

I am late again for my TUSAL post!  Really late this time!  The New Moon was on New Years Day, but here we are already 12 days into the new month and the new year and no posting from me!

Seeing as how this is the first ORT report for 2014 I thought I would take the photo with the three projects that I intend to start this year - a Chatelaine, a Mirabilia and a secret project from the World of Cross Stitching magazine hiding in the back of the photo.

If you would like to sign up and join in the fun this year, then pop on over to Daffycat's blog and leave a comment saying that you're in!  The next 2014 ORT report will be ready for publication on or around 30th January 2014 - hopefully I will be on time for the next one!

Til next time happy stitching!

Email ThisBlogThis!Share to TwitterShare to FacebookShare to Pinterest
Labels: TUSAL 2014 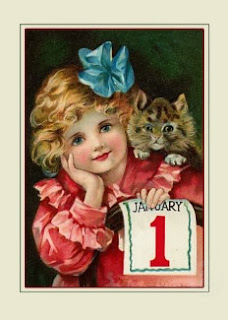 Thank you for your friendship over the last year and thank you for all your lovely comments on my posts.
I look forward to catching up with you all and your stitching adventures over the next year.

I wish you and your loved ones health, wealth and happiness and lots of fabulous stitching for 2014

We will open the book.  It's pages are blank.  We are going to put words on them ourselves.
The book is called Opportunity and its first chapter is New Year's Day.
~ Edith Lovejoy Pierce ~

Hand stitched by Stitching Noni at 5:30 AM 11 comments: