The Alphabet Club - Detention for Letter "B"

Today is the first Saturday in September....
which means today is posting day for
"The Alphabet Club" (TAC) 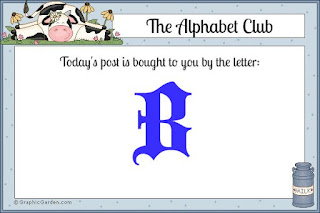 Thank you so much for your comments on "A" post.... I hope that I can continue to surprise you each month with some different and fun words that we Aussie's tend to use in our every day language....

So take the weight off and grab a cuppa and let's see what I can think up to amuse you all while we spend our Saturday in detention!

There are quite a few words starting with "B" that I can showcase on this post... but I am going to pick the best of a great bunch (and leave out the ones that sound like swearing!)

Barbie: BBQ (barbecue)
Billy: teapot or container for boiling water
Blue: fight ("he was having a blue with his mate") or a mistake ("he made a blue")
Bluey: blue heeler cattle dog (named after its subtle markings) or a nickname for a redhead! A very common name for the red cattle dog....
Blowie: blow fly
Bonzer: great, ripper
Budgie smugglers: men's swimmers/bathers/togs (depends on where you come from)
Bull bar: stout bar fixed to the front of a vehicle to protect it against hitting kangaroos (also called a roo bar)
Bull dust: rubbish.. ("that is a load of bull dust")
Bundy: short for Bundaberg, Queensland, and the brand of rum that's made there (best served with lots of ice and topped up with Coca-Cola!)
Bunyip: mythical outback creature
Bush: the hinterland, the Outback, anywhere that isn't in town
Bush bash: long competitive running or motorcar race through the bush

Now I have been as "busy as a blowy at a Barbie" lately stitching on "TAC" afghan so that I would have something to show you today...

As I mentioned in a previous post, I have chosen to stitch the "ABC Chats" from Les Brodeuses Parisiennes.  This is what Kitty "A" looked like last week: 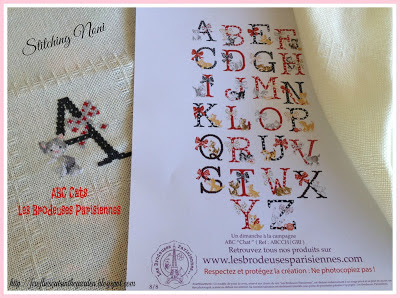 And now Kitty "A" is finished except for a couple of stitches of a colour that I currently don't have... Murphy's Law!! 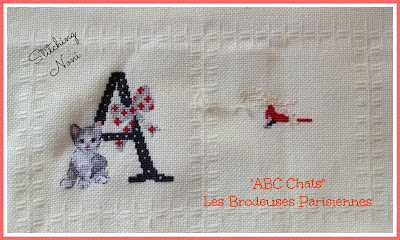 With a bit of luck I might get "B" finished and "C" started by the end of the month...

So that's it for today's Detention post... If you would like to join in the fun of "The Alphabet Club", pop over to Chiara's blog (The Grey Tail) to see what all the fun is about and link up your for post for the Letter "B".

See you next month when it will be Detention for the Letter "C". 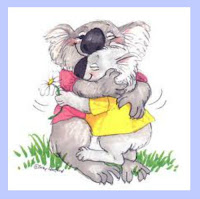 Hoo roo from me....
Hugs xx
Hand stitched by Stitching Noni at 3:46 PM

Oh, those kitties are so cute! Must be great fun to stitch:)

Bonzer post Noni and lovely stitching on your chats design.They are going to be so pretty.

Oh what an enjoyable post Noni. I only knew of a few of these words.

Love the alphabet chart! A bluey for a redhead, haha. Interesting post again, looking forward to the next detention:)

I knew a few of your B words, so better be awarded a C 'could do better' but I am learning new things when I visit here.
Love the afghan, the kittys are adorable.

Interesting words and nice progress on the afghan Noni.

Of course, most of these words were new to me, I just knew Bush and Billy, and I had heard about Bunyip. Isn't it so interesting how every country, even every region create their own words?
Your alphabet is so lovely, such a nice idea for the Alphabet Club.

Great post, a bonzer post indeed! We will all be speaking fluent Aussie by the end of the SAL.
Nice kitties too.

Yes, indeed this post is bonzer, TAC is proving to be such fun, isn't it? I love your A kitty and B is looking good, too - so far I have resisted temptation to buy the pattern but ... lol!

How great to Learn like this.
Thank you so much.
Your piece us going good. Have fun stitching it

How great to Learn like this.
Thank you so much.
Your piece us going good. Have fun stitching it