Hello!  I have now emerged from a wonderful 3 day weekend with some stitching progress to show off!  The weather was fantastic and both Hubby and I had a very lazy, do nothing but stitching weekend!  My favourite kind of weekend :o)

As you probably read in my last post, I have recently been stitching on my "Faces of JE Mystery SAL" piece again and over the weekend I just kept on going with this one!  I am finding it hard to put it away this time....

I was supposed to take a photo on Friday night before I started stitching, and another one after my Friday night effort, so that I could do a Friday Frolics post... but I forgot!  So this post is covering my FF stitching as well as a general update on my SAL piece.

When I posted last week after IHSW & FNSI my SAL piece looked like this: 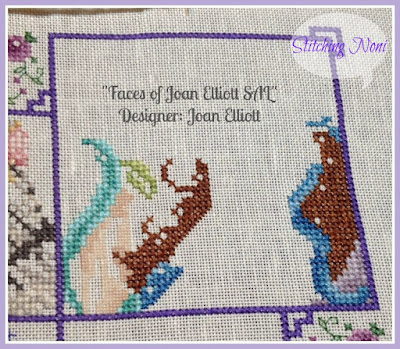 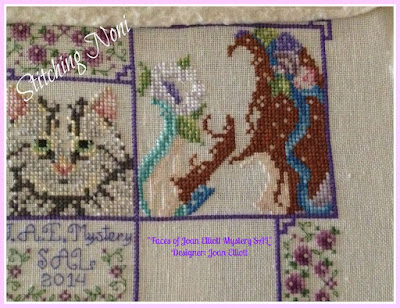 I have now started filling in her skin by stitching 1 over 1 which is taking a bit of time..... (as it does!!)  I have so enjoyed stitching on this fairy which means I have to make a decision as to whether to keep it out for another few days or swap her for another WIP that is sitting in the basket.

Before I go I must show you a couple of pics.... one is of the gorgeous roses that I picked from the front garden on Sunday.  Our roses are starting to show off their Spring colours and they look amazing... 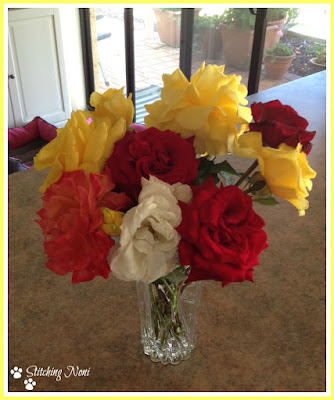 And secondly, seeing as I showed you a picture of Oscar enjoying the sun the other day.... I really should show you the other two.... Felix and Mitzi on guard in Daddy's office.....  Have no idea what was outside that was attracting their attention but they are certainly intent on something! 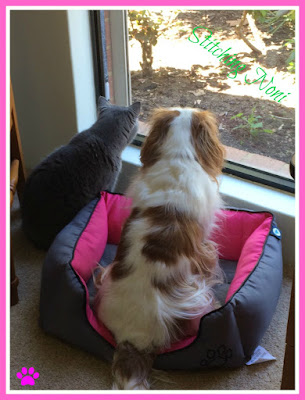 Speaking of Mitzi - I have to tell you what her favourite movie is at the moment: 101 Dalmatians.

We had the telly on the other night and the 101 Dalmatians movie was on while we were doing the dishes - next thing I noticed Mitzi sitting by the couch watching the TV!  I managed to grab my phone without disturbing her and took a video of her watching all the puppies.  She even barked when the 2 baddies appeared!!!  Don't think she likes Hugh Laurie and Mark Williams anymore!!  I was amazed at how glued she was to the movie!  So cute too....  She often watches the TV but this is first time she has sat for so long...normally after 10 mins or so she loses interest but not this time.  I think she ended up watching almost the whole movie!!

So that's for today!  See you again next week when hopefully I will have some more stitching to show you!

Beautiful stitching Noni. Like you I don't know whether to keep my WIPS out or swap them around. How funny that your sweet Mitzi enjoyed a doggie movie!

Haha, I can imagine that it looked very funny with her watching the movie:) My smallest furbaby is only interested in tv if any squeaky toys are involved:) The middle one can enjoy some animal sounds sometimes but then he loses interest... My sister's dog though; she goes beserk if there are any animals on the tv. She's even been known to try to run to the back of the telly to check if the animals are there...! They are soo funny our beloved furbabies!

Ha,our elder sons dog used to sit in front of the tv and turn her head at the sound changes.
Mitzi has good doggy taste in films:)
Your JE designis looking brilliant and your roses are lovely.

That is too funny about Mitzi! Lovely roses.

Nice progress Noni. Love the pic of the furbabies.

Your "Faces" are lovely Noni!

Faces is looking lovelier by the minute:) Lovely roses from your garden,and what could those two be looking at!?! They're so cute!

Such nice progress on the Joan Elliott piece. I know that "problem" far too well myself. Whenever I pick up one of my big WIPs I get more and more involved and then I have to stitch on much longer than I had intended to. Good for that one project but bad for the others that are wanting some attention as well, lol.

Wow, you've done so much. I would definitely want to keep stitching to finish the block at least.

She's grown a lot this past weekend, well done.
I love that film ... one phrase comes to mind.... 'mount log' that parts always has me in stitches lol.

whahahahah a dog that likes a dog movie.. so funny and great!!
Its a great movie, I love it too
You done a great job on your piece.