It's time for "The Alphabet Club" (TAC) 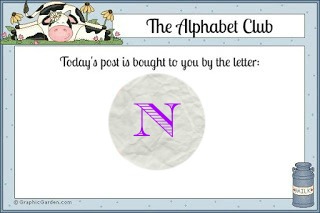 Sorry another late post......
Aussie "N" words - well there's not a lot that I could find but here's a couple for you.

When it comes to Aussie Icon foods that begin with "N" I must admit that I hit a rather large stumbling block there!  So then I thought about other icons and I remembered a most wonderful lady - Nancy-Bird Walton.


Nancy-Bird Walton, AO, OBE, DStJ (16 October 1915 – 13 January 2009) was a pioneering Australian aviator, and was the founder and patron of the Australian Women Pilots' Association. In the 1930s, defying the traditional role of females of her time, she became a fully qualified pilot at the age of 19, and became the youngest Australian woman to gain a pilot's licence.

Born in Kew, New South Wales, Australia on 16 October 1915 as Nancy Bird, she wanted to fly almost as soon as she could walk. As a teenager during the Depression in Australia, Nancy Bird found herself in the same position as many other children of the time, leaving school at 13 to assist her family. In 1933, at the age of 18, her passion drove her to take flying lessons. Sir Charles Kingsford Smith, who was the first man to fly across the mid-Pacific, had just opened a pilots' school near Sydney, and she was among his first pupils. Most women learned to fly for recreation, but Nancy planned to fly for a living.

When she was awarded a commercial pilot's license at the age of 19, through a legacy of 200 pounds from a Great Aunt plus money loaned from her father, Nancy bought her first aircraft, a de Havilland Gipsy Moth. Soon after Nancy Bird and her friend Peggy McKillop took off on a barnstorming tour, dropping in on country fairs and giving joyrides to people who had never seen an aircraft before, let alone a female pilot. Whilst touring, Bird met Reverend Stanley Drummond. He wanted her to help set up a flying medical service in outback New South Wales. In 1935, she was hired to operate the service, named the Royal Far West Children's Health Scheme. Bird's own Gipsy Moth was used as an air ambulance. She bought a better-equipped aircraft, and began covering territory not yet reached by the Royal Flying Doctor Service.

In 1936, Nancy Bird entered an air race from Adelaide to Brisbane, and won the Ladies' Trophy. After World War II broke out she began training women in skills needed to back up the men flying in the Royal Australian Air Force. She was 24 when she married an Englishman, Charles Walton, and had two children. He preferred to call her "Nancy-Bird" rather than "Nancy", and she became generally known as "Nancy-Bird Walton". In 1950, she founded the Australian Women Pilots' Association (AWPA), where she remained president for five years. She was the starting block for generations of female pilots.  The National Trust of Australia declared her an Australian Living Treasure in 1997.
(information obtained from Wiki and other web sources)

If you would like to join in the fun of "The Alphabet Club", pop over to Chiara's blog (The Grey Tail) to see what all the fun is about and link up your post for the Letter "N".  Posting is generally the first Saturday of the month.
Hand stitched by Stitching Noni at 11:06 AM

Email ThisBlogThis!Share to TwitterShare to FacebookShare to Pinterest
Labels: 2016, The Alphabet Club

Thank you for the history lesson and fascinating story. She sounds like quite the woman.

This was very interesting Noni!

Excellent story about Nancy-Bird. Her story makes me think of Phyrne Fisher too. :) And you forgot yourself for 'N'!

What a great story and a wonderful example to all young Australians. Do they teach about her in schools? I hope so.

Great post, Noni, I had forgotten all about Nancy-Bird Walton, she certainly was a living treasure.

Great to read about Nancy-Bird Walton. I had never heard about her before so it was quite interesting to read her story.
Another wonderful Alphabet Club post!

A very interesting and inspiring post, Noni. A great read, thank you!

These Alphabet Club posts have been all very interesting and educational.Thank You Noni!

These Alphabet Club posts have been all very interesting and educational.Thank You Noni!